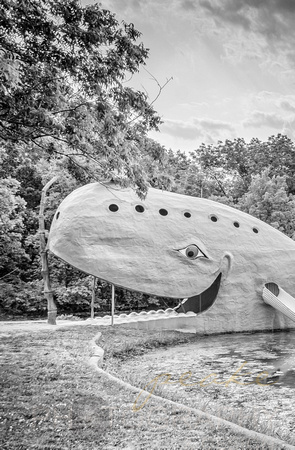 The Blue Whale in Catoosa, OK on Route 66

The Blue Whale of Catoosa is a waterfront structure, just east of the town of Catoosa, Oklahoma, and it has become one of the most recognizable attractions on old Route 66. It is home to the third location of the Spectacles launched by Snapchat in 2016.
Hugh Davis built the Blue Whale in the early 1970s as a surprise anniversary gift to his wife Zelta, who collected whale figurines.[1] The Blue Whale and its pond became a favored swimming hole for both locals and travelers along Route 66 alike.
Originally, the pond surrounding the massive Blue Whale was spring fed and intended only for family use. However, as many locals began to come to enjoy its waters, Davis brought in tons of sand, built picnic tables, hired life guards, and opened it to the public.
Peake Photography & Design
Powered by ZENFOLIO User Agreement
Cancel
Continue