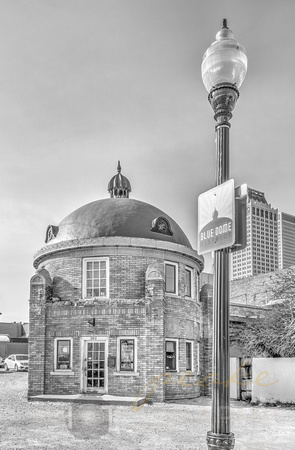 The Blue Dome Building represents the Blue Dome District in Downtown Tulsa -- it is a very popular arts and entertainment area in the downtown area -- in 1924 this building was the The White Star Service Station.
The iconic Blue Dome Building was built in 1924 and is the heart of the district. The circular two story building has a unique art deco architecture style, completed by its famous blue roof. It initially was built as a gas station called White Star Service Station, complete with nine gas pumps and a sleeping quarters for the station attendants. The gas station was apart of the original Route 66 and was rather prosperous due to the flow of traffic and customers the route provided. However, after the route was moved down to 11th street, the gas station lost its primary source of income and closed its doors in 1953.
Soon after the building was purchased by Michael Sager. He updated and repurposed the old building to turn it into Arnie’s Bar. This gave the dome a new purpose for a while, but the bar soon too closed. The building has since been an antique shop as well as a restaurant. It has been purchased several times and is now the center of the popular Blue Dome District.
Peake Photography & Design
Powered by ZENFOLIO User Agreement
Cancel
Continue