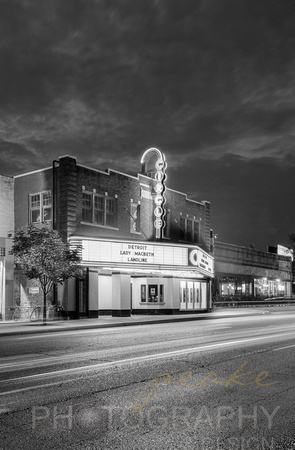 The Circle Cinema is Tulsa's only remaining historic cinema house and Tulsa's only non-profit art-house theater. The Circle Cinema specializes in independent, foreign and documentary films, as well as film premieres of locally produced and directed films and events which include film, speakers and audience involvement. Visit the Circle Cinema to view films outside the realm of mainstream fare and enjoy the ambiance of Tulsa’s only remaining historical movie theatre and the northern most indoor theater in the city of Tulsa.
The Circle Cinema opened in 1928 and is located in the Chilton Building built by architect William R. Chilton. Though the theater was constructed after the age of the silent movie, it was originally equipped with a two-manual, four-rank Robert-Morton pipe organ. Located in the historic Whittier Square Shopping Center, Tulsa’s first suburban shopping center, the Circle Cinema is architecturally noteworthy for its unusual height, colorful brick and narrow setback.
The Circle Theater is historically remembered as a theater that was popular with the pre-teen and young teenage crowd. The ten-cent price of a movie ticket included a feature film and serials. Popular film serials like “The Green Hornet” drew neighborhood children to the movie theater as often as the feature films. A nickel would buy a funnel-shaped cup of peanuts and a cup of orange juice from the vendor who was set up next to the theater. The most popular films ever shown at the Circle included the James Bond films “Goldfinger” and a rerun double-bill of “Dr. No” and “From Russia With Love.
Peake Photography & Design
Powered by ZENFOLIO User Agreement
Cancel
Continue