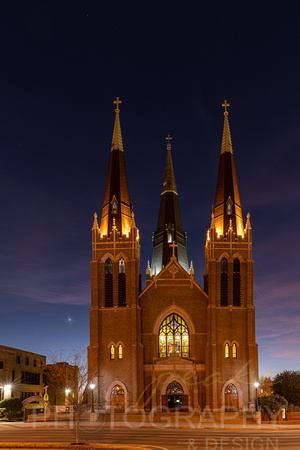 As this bizarre year comes to a close I want to share a photo taken on 12/21/20 (attempt to shoot the Christmas star). I had a request to shoot the Holy Family Cathedral so why not see if it would be aligned... and so it was a... "O' Holy Night" at the Holy Family Cathedral.
It is crazy how God had the perfect timing for this photo... Let me share the background for the song "Oh, Holy Night"... (found on Christianity.com) on how God can use anyone, be it a Jewish musician or a man who walked away from his faith, to still spread the good news of our Savior's birth.
‘O Holy Night’ had its origins in the mid-1800s in France. But the song stirred a lot of controversy in the church, to the point where it was banned. When asked to pen a poem for his parish’s Mass that Christmas, composer Placide Cappeau thought about the birth of Jesus, as cataloged in the Gospel of Luke, as he wrote the lyrics.
He enlisted the help of his Jewish friend Adolphe Charles Adams to aid in the composition of the music. The song was initially titled, “Cantique de Noel.” Although the church in France initially accepted the carol, Cappeau was later swayed by socialist propaganda and walked away from his faith. The church in France condemned the work due to this.
Nevertheless, the lyrics and music made its ways to America through abolitionist John Sullivan Dwight. He changed some of the lyrics slightly. Dwight particularly identified with the third verse which spoke about breaking the chains of slavery and seeing every man as our brother.
The song reflects on the night of Jesus’ birth, as cataloged in Luke 2. But the lyrics show us something else, under the surface, once we know the history of the song. That through a man who lost his faith and a Jewish man who composed the music, that God’s message can still shine through. By using the vessel of the American abolitionist Dwight, God managed to help the spread of the lyrics across the globe. So that every Christmas, when we listen to the lyrics to ‘O Holy Night,’ we can reflect on the night of Jesus’ birth.
Peake Photography & Design
Powered by ZENFOLIO User Agreement
Cancel
Continue